What Are The Common Causes Of Motorcycle Accidents Near Boca Raton? 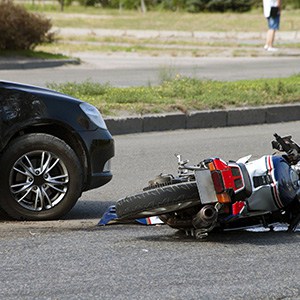 The number one cause of a motorcycle accident is when a vehicle turns in front of you. Drivers of vehicles have the problem of seeing motorcyclists and making sure they’re taking the same kind of care and attention and deference to a motorcycle as they would to any other vehicle. Motorists just don’t recognize either how fast a motorcyclist is going or that he’s even there. They turn left directly in front of the motorcyclist, giving the rider no opportunity to avoid getting hit. Another cause of motorcycle accidents is lane changing. Because trucks and buses don’t have such great visibility on their right and left sides, they’ll switch lanes directly into another vehicle like a motorcyclist.

Motorcyclists must stay attentive and give themselves space. If they see someone changing lanes, give them space. You have no defense against a vehicle making a lane change. You are on a motorcycle up against a truck or a car or a bus. Always give yourself as much opportunity as you can to avoid a crash.

The best crash is one that you avoid.

What Are The Common Types Of Injuries Sustained By Riders In Motorcycle Wrecks?

The types of injuries are everything from road rash (skin abrasions and tearing off of skin from the fall), broken and/or shattered bones, brain damage, and death.

The more protective gear you’re wearing, the better. If you’re wearing a helmet, your chances of surviving go up monumentally in a motorcycle crash. People survive motorcycle crashes because they are wearing protective headgear. They would not have survived without it. Motorcycle injuries tend to be more catastrophic, severe, and long-lasting. It’s more difficult to recover from them than any other type of motor vehicle collision.

Is It Mandatory For A Rider To Wear A Helmet And Other Safety Gear In Florida? Will It Impact My Injury Claim If Either Of Us Was Not Wearing Safety Gear?

Will not wearing a helmet hurt your motorcycle accident injury claim? Absolutely, yes. Anything that would minimize your injuries or might make your injuries less severe, you’re responsible for.

Insurance companies can certainly point to what you did and did not do that would have made a difference. Of course, the other side is going to have to prove that. But wearing a helmet versus not wearing a helmet is one of those areas that can come back and hurt you in terms of your recovery from an accident. It can also hurt you in terms of how badly you’re hurt, which is the number one concern.

What Are Defenses Used By Insurance Companies To Deny Or Limit My Motorcycle Accident Injury Claim?

There are a lot of defenses that are used by insurance companies, and any of those can be used in motorcycle cases. For example, returning to comparative liability or even complete liability, it was your fault, not our insured. Our insured is of course telling us the truth when he tells us his version of how it happened. You, of course, are not telling us the truth because you’re not our insured. That is oversimplifying it, but that has been how insurance companies appear to handle these cases. Defenses can include everything from failure to reduce damages to liability to even coverage issues themselves. Insurance companies can deny coverage or attempt to deny coverage based on some technicalities in the application process, and how the claim is handled.

For more information on Motorcycle Accident Injury Claims in Florida, a free initial consultation is your next best step. Get the information and legal answers you are seeking by calling (866) 824-4222 today.